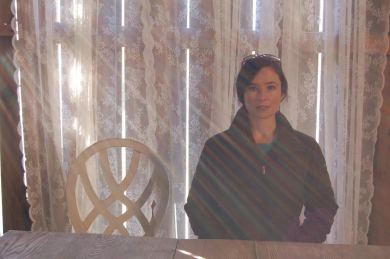 L.I. Henley was born and raised in Joshua Tree, California. She won the 2017 Perugia Press Award and her second full-length collection, Starshine Road, will be available in September. The poems appearing in The Poet’s Billow are from her unpublished manuscript Whole Night Through, a novel-in-verse loosely based on a compilation of murders that have occurred in her hometown. Read our interview with L.I. Henley.

Submit to the Pangaea Prize

At the concert, lighters wave like
thumbs of fire on a placid lake,
smokeless, clean, not a second death
but a tablet of slate to test
the metal we are made of. Gold,
tonight our hearts are golden bowls
set floating on the lake of fire.
Ella’s lighter keeps going out
so I give her mine and hoist her higher,
her thighs crowning my head. Soft thorns.

A fly landed on her shoulder
at the party. She was wearing
nearly nothing and I knew we’d
have six children. She drank too much
Nyquil. She mixed it with Vodka.
I held her hair. I sprayed perfume.
I never told. The fly drank her
sweat because she was so alive.
The river asked us for our sin, Amen,
and I knew we’d have six children.

Night plays “Taps” with our spines
and the mothers occupied with their scrubbing
ignore us for casserole dishes
and our siblings’ cries for cake.

Day is done, gone the sun
from the lakes, from the hills,
from the sky—

I am breaking you for the first time.
Imagine God sees us through the keyhole
and it’s not my father, not your father,

not anyone’s at all. When it’s over,
you pick up the trumpet again
but your fingers refuse to play.

I’ll press the keys, I say, you just make
the sound. When it’s time to walk,
I’ll lead you straight past the mothers in their nightgowns,

straight past the fathers playing cards,
the babies in their pens, the dogs at their chains,
I’ll lead you into the sunflowers and break you again.


Jake and Ella at Branford Springs

Midnight, we hung our slimy legs
over the ledge of slick limestone,
both smelling like dogs halfway dry
and rust and bread. I asked again.
To the desert? she echoed, my
bride, and I was scared she would jump
so I lay on top of her like
I never had but always dreamed except
in the dreams there was light coming in waves,
smells of grass, long stalks, yellow leaves.


Jake, the Young Marine, Prepares to Leave His Hometown

The oaks of Branford, Florida—
I know them all by bark and crown,
know the white oak from bur and swamp
and chestnut. Young leaves, pinkish down
softer than dog ears, the white oak
is frosty until its acorns
feed deer, mice, ducks, larvae of moths.
The gray bark peels itself away
from itself. Hardpan, wrinkled grandfather
born old, ranting in hurricane

wind. Pond cypress, cabbage palm, slash
pine, you are not God’s favorites.
We bury our dead under oaks
so that we can find them again
when their moaning calls us from dreams
and down ladders pitched against
our father’s clapboard houses, reeds
bending as we glide like sailing
stones. But in the desert, there are no oaks,
no moans, only pinyon, thunder.


Ella Speaks from Her Marine Base Apartment in 29 Palms, California

Infinity stretches out between us
and he asks if I’m going to the ranch today.
He nuzzles in my sore tits. I want to kick him
in the shin. Would he tie ribbons
to my saddle, feed me carrot nibs,
and bat away the flies?

Jake will always look like a boy
to me, even when he’s eighty, his ears are long,
and I am dead.

I have to remind myself
that he’s the one in the Corp, not me.
I am the one training to be a window stuck open,
single pained, spider-cracked.

No one will be able to close me.

I’ll let everything in.

Wind, centipedes, rain, thieves,
the little gnats
that cluster in banana peels—all will come
and go through me and I will feel everything.

In the saloon, a man recognizes me
as Jake’s wife. The marine ball, he says,
we met. You spilled a drink
on your man’s dress shoes. Maybe
you’re a klutz, he says. He has a face
like a bullsnake with scars
around his lips like his mouth
was once sewn shut. We’re actually neighbors,
he says. We’re all neighbors.
I go out back to the blood orange
moon. After I met Jake
I forgot how to pray because
I didn’t need to anymore. Praying
is really just giving yourself advice
you will never take. When the blood moon
drips, you must find an alley
and wait. If a bullsnake man
is drunk and wants to fuck you,
if you wait and no one comes,
if your mother’s hands appear
in the blood moon, if any of these
or none of these, if a tidal wave
comes towering down the street,
if you see God crouching
near the dumpster, if He winks
and says, Ha-ha.

Born early, the blue hour between
dawn and sunrise, mother’s gloved hands
rubbing warmth against my cold night,
tubes of air, glass crib. Understand
I wanted full sun, a ripened
nativity, summer solstice,
to be a clay baked tough as hide,
to offer myself as roof, callus
for your wounds. Ella, here’s a cigarette…
some coffee. Stay awake with me

until blueness comes, dance for me,
O, Potter, turn me back to dust.