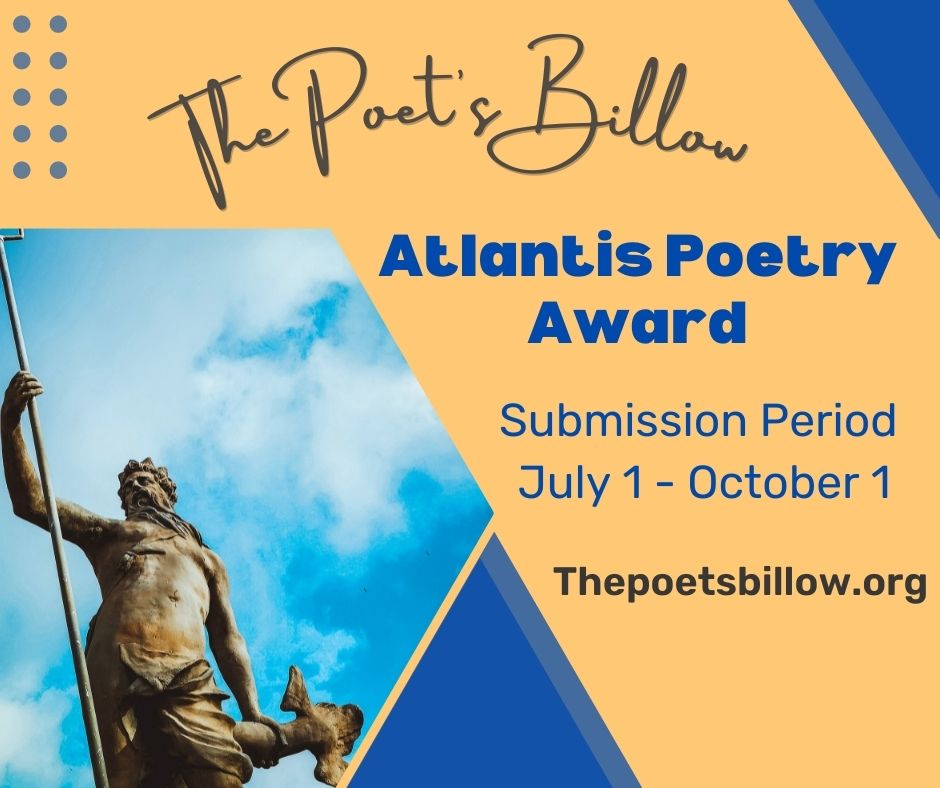 Registering for the Wednesday Workshop is now even easier! Simply sign up using Calendly. Just click the calendar below.

Let The Poet’s Billow help you reach your writing, revision, and publishing goals in the New Year! For more details click this link.

There are only a few days left to submit to the Atlantis Award. Deadline is November 30. Submit up to 3 poems. We nominate for the Pushcart Prize, Best of the Net Anthology, and The Best New Poets Anthology.

The Atlantis Award is given to a single best poem. The winning poet receives $300 and will be featured in an interview on The Poet’s Billow web site. The winning poem will be published and displayed in the Poet’s Billow Literary Art Gallery. Finalists will be considered for publication. *The contest deadline has been extended to November 30th*

See our submission page for details.

Karla Linn Merrifield has been a finalist for many poet’s billow’s poetry awards, published over ten collections of poems, and is published widely. She now has a website where you can learn more about her many talents and travels. Check it out: https://karlalinnmerrifield.org/books/

Karla also has a blog you can subscribe to: https://karlalinnmerrifeld.wordpress.com/

At The Muses’ Refugia blog there will be:

To enter the Atlantis Award see our guidlines here.

We also named a number of semifinalists. This was a difficult list to make and hard decisions were made on every level of judging. We receive so many great poems and don’t have the resources to publish them all.

The Poet’s Billow is also now welcoming submissions to the Bermuda Triangle Prize and the Pangaea Prize. If you would like to stay updated on contests and publications in the future you can join us on Facebook and Twitter.

Sara Lupita Olivares is the author of Migratory Sound (The University of Arkansas Press), which was selected as winner of the 2020 CantoMundo Poetry Prize, and the chapbook Field Things (dancing girl press). Her poems have appeared in The New York Times, Gulf Coast, Denver Quarterly, Salt Hill Journal, DIAGRAM, and elsewhere. Currently she lives in northern New Mexico where she is an assistant professor at New Mexico Highlands University. https://www.saralupitaolivares.com

Peter Filkins is the author of five collections of poetry, the most recent of which, Water / Music, will be published by Johns Hopkins UP in April 2021. His previous volume, The View We’re Granted, received the Sheila Margaret Motton Best Book Award from the New England Poetry Club, and his poems, essays, translations, and reviews have appeared in The Paris Review, The Yale Review, The Sewanee Review, Poetry, The American Scholar, The N.Y. Times Book Review, and numerous other publications. He teaches writing and literature at Bard College at Simon’s Rock, and courses in translation at Bard College. https://jhupbooks.press.jhu.edu/title/water-music

There is only a short time left to submit to the Bermuda Triangle Prize. Send us your poems on the theme of Fire.

The Bermuda Triangle Prize is given to three poems on a theme from up to three different poets.

We are open to interpretations on the theme: Forest fires, magical fire, the absences of fire, your fired, how to extinguish a fire, the fires of passion. Send us your interpretation however literal or liberal.

Each winning poem will receive $50, for a total cash prize of $150. The poems will be published and displayed in the Poet’s Billow Literary Art Gallery. Up to five finalists will be considered for publication.

To enter the Atlantis Award see our guidlines here.